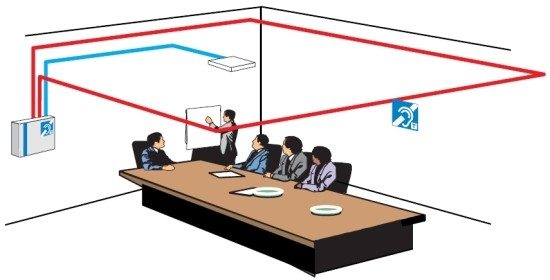 Infrared systems can provide high-quality sound for the hearing impaired. The infrared systems are available in stereo (or dual mono) versions. This system uses invisible infrared light to carry sound to portable receivers. The complete system consists of infrared ‘radiators’, that gets its signal from a microphone placed in front of the person speaking or via a direct connection from a sound system, or other sound source, personal IR receivers are then used for the user. Radiators cast infrared light over the listening area, rather like floodlights. You may need one or more infrared radiators, depending on the size of the venue. The quality of sound received by the user is of a much higher standard than that of induction loop systems.

How do infrared hearing systems work?

1 The input to an infrared system can be from a microphone, a sound system or any other audio source. They each produce an electrical signal which contains the audio information.

2 This signal is fed to the modulator which prepares the audio signal for the subsequent infrared (IR) transmission.

3 This processed electrical signal is then fed to the radiator. The radiator light emitting diodes produce the (invisible) infrared light and radiate it into the room.

4 Wireless receivers are used to convert the infrared light signal back into an electrical signal and then into an audio signal again (or a personal induction loop if used by a hearing aid wearer). There is no limit to the number of receivers that can be used on a system.

Most infrared hearing systems are single channel and use a radiator with an integrated modulator.

What is an infrared hearing system?

An infrared hearing system is an assistive audio system to aid communication with hearing impaired people and is a popular alternative to an induction loop system. A typical system consists of an audio source, an infrared radiator (transmitter) and infrared listening receivers.

Why use an infrared hearing system in place of an induction loop system?

Infrared hearing system have many advantages over induction loop systems-

-There is no loop wire to run around the perimeter so it is easier to install in rooms with multi-levels e.g. Theatres, or wide areas e.g. Exhibition halls.

-As infrared light carries the signal there are no losses due to the amount of steel in the construction of the room which can affect the signal and frequency response of induction loop systems. Systems can also be used (with stethoset receivers) in environments with high background magnetic interference.

-Portable infrared hearing systems are quicker to set up than portable induction loop systems as there is no wire antenna to install around the perimeter of the room. There are also reduced Health and Safety issues associated with trailing wires.

-In a cinema, a twin channel infrared system would be used to feed the film soundtrack for hearing impaired people on one channel, and an audio description to assist visually impaired people on the other channel. Signs and an announcement before each film inform customers that the system is available. Receivers are then issued to the customers who request to use the system.

-In a council chamber or conference room where bilingual meetings take place and a hearing support system is required (to comply with the Disability Discrimination Act). In this case one channel of the system would be fed by an interpreter’s microphone, and the another channel fed from the floor language via microphones (or a sound system).

-Twin channel receivers are used by the delegates to listen to either the translated or the floor language.

If more than 2 channels are needed then a narrow band infrared system can be installed allowing up to 32 channels. These are used for simultaneous interpretation at international meetings.

Looking for a quote for your next project?